Get Your Stories Out

The Variety of Audio Cassette Tapes

It is always interesting to see the different kinds of audio that cross my desk for transfer. Recently I received two audio cassette tapes for transfer that will be synced to a slideshow permanently for the first time in 20 years.

The story started when Barbara wanted to preserve her family’s home movies and slide shows. She needed to find a reliable company that would take great care in transferring her media to a format she could play now and into the future.

She found iMemories in Scottsdale, Arizona.

iMemories will digitize 8mm, Super 8, VHS, Betamax, PhotoPrints, Slides and many more formats. With 6.5 million memories digitized, Barbara was thrilled that she found the right company to transfer her history.

But Barbara also had some audio cassette tapes that belonged with one of her slideshows. In the good old days, you would gather around to view the slide collection while a family member narrated the story of the slides.

Because iMemories specializes in visual conversions such as film, videotape, and pictures, they recommended SPEAK HOUSE Audio as their go-to professionals for audio transfers.

I spoke to Barbara personally when she called us, and she explained that her goal was to “marry” the audio from the cassettes to the slideshow that iMemories would digitize for her.

I mentioned that this was a service that we provide and that we could, with her permission, access her account with iMemories and download the silent visuals, “sync” the narration from the audio cassette tapes to the video file and create a new DVD for her.

Now, Barbara is a savvy, tech-friendly woman, and decided that she would enjoy using the programs on her computer to sync the audio to the video herself.

After discussing the file format she would need to complete the work, the cassettes were sent out to SPEAK HOUSE Audio to be converted to digital files.

As we do with every client, we contacted Barbara when her tapes arrived so that she could be sure they arrived safely and on time.

The cassette tapes were transferred in their entirety, even though we knew that they were not full. In fact, tape two only had about ten minutes of audio on it.

Transferring the entire tape ensures that we capture everything that may be on it, and it gives us a waveform visual of the audio in relation to the tape length.

So, if a tape is 60 minutes long, but is only half full, I have a file that is a 60-minute representation of that tape, before any editing is done. If I have to come back to this job a few days or even months later, there is no question that we have captured everything that tape contains.

After editing out the sections on the tape where there was no recording, the finished audio from both tapes totaled just under 50 minutes in length. There were some special requests to remove some of the audio as well as try to reduce the level of one of the voices on the tapes.

There was a male voice narrating the slideshow that was most present and upfront in the audio. Other family members could be heard reacting and commenting in the background, but there was also a female supplying narrative comment as well.

This was the voice Barbara wanted to be reduced, and it was hers.

For much of the recording, this voice was in the background with other voices. An attempt was made to reduce the volume by using an expander/gate which would expand the ratio of loud to soft sounds.

But the dynamic range of both voices was not consistent. The male voice, at times, would become soft and low, and the female voice was sometimes just as loud as the male when he was at his peak levels.

In that case, the expander/gate would have a negative effect on the softer, quieter parts that we did not want to be turned down for the male. And it would allow for no reduction in the female voice where their volumes were equal.

A better solution was to find an equalization setting that would reduce the frequencies of the female’s voice without compromising the narrator’s voice. We also did not want to make too drastic a change to the integrity of the audio signal overall. 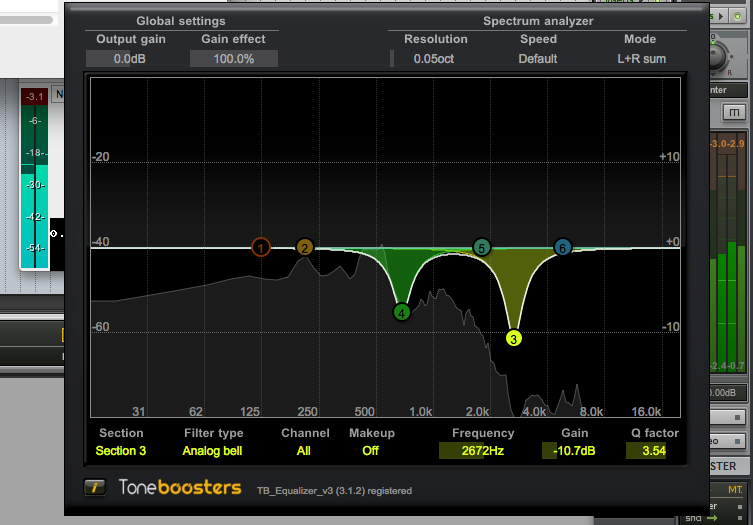 This proved to be a reasonable compromise that produced the desired effect.

The narrator is still upfront and present, but we have essentially turned down the volume of particular frequencies of the female voice. We have given her a slightly less present quality which has the effect of pushing her further back into the room, further away from the microphone.

Once we were happy with where this level worked best, the files were then converted to the highest quality mp3 format and uploaded to our FTP site.

After getting her files, Barbara responded via email with:

You are very welcome, Barbara. Thank you for trusting you precious tapes with us, and thanks to iMemories for the many referrals they send our way.

You might have audio cassette tapes or reel-to-reel tapes that are a narration for a slideshow or movie reel. Even if you don’t have the visuals anymore, they are still a mini part of your story and a moment in time that will never happen that way again.

Send your tapes to SPEAK HOUSE Audio and we will transfer them to your preferred format so you can preserve your family history for generations to come.